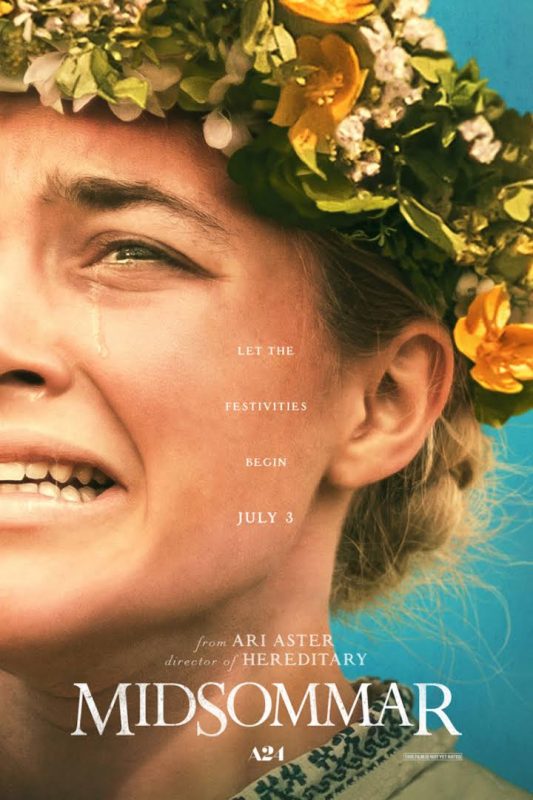 by Dylan Ferguson–Halloween is coming soon, which means it is primetime for horror films. Classics such as Friday the 13th, Halloween, and The Exorcist may come to mind. However, after viewing Ari Aster’s 2019 folk horror film “Midsommar”, there may be a new classic to add to that list.

Midsommar tells the story of Dani (Florence Pugh), who after suffering from trauma related to losing her parents and sister, experiences strain on her relationship with her boyfriend Christian (Jack Reynor). As an attempt to patch up their relationship, Christian invites Dani to join him and his friends to a trip Sweden to join his friend Pelle (Vilhelm Blomgren) in a Midsummer celebration. The celebration happens once every 90 years and the group are intrigued. However, not everything is as it seems, as maypole dancing competitions, sex rituals, and human sacrifice become the forefront of the festival.

The first thing that really stood out to me was the style and cinematography. Many shots give off the uneasy energy similar to Stanley Kubrick’s The Shining, with long tracking shots and centralized focus. To counteract this, much of the set design and composition seems to be inspired by a Wes Anderson film with bright colors and at times whimsical design. While it may seems like those two styles may not go together, the two styles interact together in a very interesting counterpoint style that helps keep tension in an what seems like a beautiful tradition.

What stands out most is how immersive the film is. An excellent job is done to convey the inner trauma and turmoil Dani is experiencing through visions and her own immersion into the commune’s traditions and culture. Viewers become so engrossed in her journey, that like Dani, they don’t even notice what is happening around her. With a runtime of almost two-and-a-half hours, being engrossed in the story is important and Midsommar latches on quickly and does not let go until the very end.

One aspect that I did not enjoy was the graphic content. Midsommar cranks up the graphic content, which in a film so stylistic, almost feels unnecessary. Sacrificial ceremonies are shown in full detail, with occasional close-up shots of extreme gore. The aforementioned sex ritual is shown with full detail, where shots hinting of what was happening would have been acceptable. The scenes of graphic content weren’t all bad, though as the practical effects used were very well executed, and the shot composition makes even the most disturbing sequences beautiful.

Midsommar is an immersive, beautiful look into a nine-day festival of rituals, debauchery, and uneasiness on the surface. Look deeper, and the film is an interesting case study in the inner horrors of grief and emotional trauma. With this in mind, Midsommar is destined to become a horror classic.

Midsommar is available to purchase now from major digital film retailers, with an extended 2-hour, 51-minute cut available exclusively through Apple TV. Additionally, the film will be available to own on Blu-Ray and DVD on October 8th.