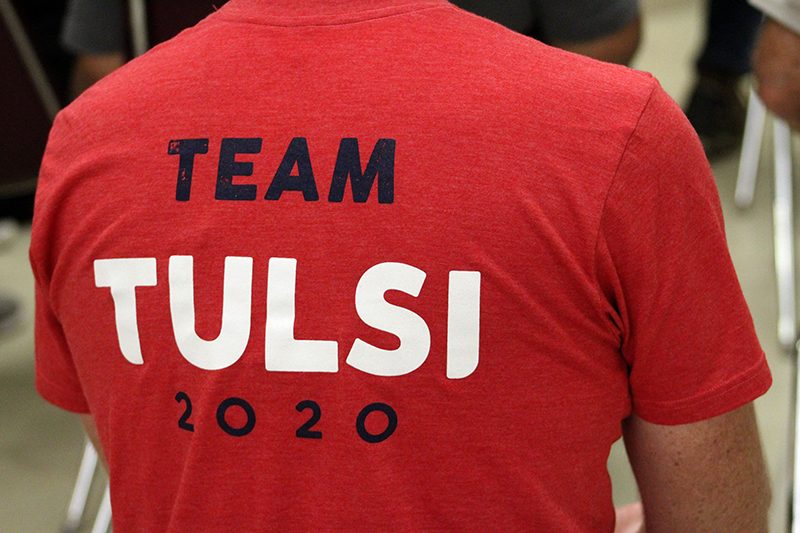 by Abby Koch–Hawaii representative Tulsi Gabbard attracted a small gathering for her September 15 town hall meeting. Gabbard’s town hall gave her the opportunity to explain why she is campaigning and to talk to Iowa voters.

A group of about 30 people trickled into the Yockey Room for Gabbard’s town hall. The group had an up-close seat to the Hawaiian representative due to the seating arrangements.

Gabbard spoke about her plan to find solutions besides going to war. One of her plans was returning to the agreements that Trump broke off. Another was coming to an understanding with foreign leaders by discussing.

The Hawaiian representative moved to her qualifications to be president. Gabbard explained that the problems in America have always been promised to be solved by a candidate. But when they are elected to the presidential office, according to Gabbard, they fail due to lack of experience.

Gabbard firmly told the small group her experience comes from political committees, military deployment, and being a representative. This experience is what she wants to use as a president and to solve the nation’s issues.

The mic was turned over to the group to ask what the representative thought about certain issues, starting with her view on nuclear weapons. Gabbard brought back her statement of returning to the agreements that Trump broke off to prevent nuclear threats.  She said she never wants to see the nation be as scared as Hawaii was when the false alert went out about a missile. “No one should fear a nuclear war,” stated Gabbard.

An elementary age girl asked Gabbard about what she would do about immigration. Gabbard praised the question then answered that the deeper issue starts with racism.

Gabbard talked about how differences between people, despite having common goals, is what makes America. Seeing the differences as strengths is what Gabbard believes will change immigration.

A question was asked about if there was anything that was reliable with media. Gabbard chuckled at the question then shared some of her more trusted sources. She later stated, “When you find good stuff share it.”

Gabbard closed out the town hall saying thank you and encouraging the group to be the voice to America.