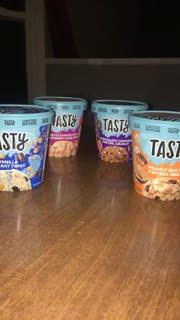 By Grace Nordquist–“Tasty” is a company most popular for its food videos and recipes. While they sell some products like cookbooks and cookware, they have not released any food products sold in stores…until now that is.

“Tasty” just released four different ice cream flavors that can be found in select stores, such as Dollar General, Lowes, and Hy-Vee. We only know for sure that the Sioux City Hy-Vee has them because that’s where my friends Jackson, Mo and I purchased them.

We got all four flavors to try: Vanilla Galaxy Twist, White Chocolate Raspberry Lava Cake, Chocolate Pretzel Crunch, and Peanut Butter S’mores Smash. Each were 14 fl. ounces at a pricey $5 each.

First we noticed the packages’ bright coloring. They were a combination of bright colors that set themselves apart from the other ice cream packaging. The containers also had their social media handles on it which was smart on their part.

Next was the Vanilla Galaxy Twist. This included classic vanilla ice cream, blue frosting swirls, caramel flavored stars, rainbow sprinkles, and rich chocolatey flakes. When first opening it, Mo commented, “It looks very fun.” After digging in, she added, “I don’t’ know how I feel about it. The frosting swirls are really getting to me.” The frosting had the overpowering flavoring, as Jackson commented “It’s like birthday cake.” I would agree with both that the frosting taste was quite strong, but personally I liked it. It does give it a fun but very fake or artificial taste.

Feeling fruity, we broke into the White Chocolate Raspberry Lava Cake. Ingredients in this include: white chocolate flavored ice cream, thick swirls of raspberry, and chunks of white cake. This one was different from the other flavors, Jackson noting, “It taste fresh.” This came from the raspberry flavoring, which Mo added, “It has a good mix of flavors.” I would agree this one was different and sweet in a new way, being the only fruit one. Personally, I didn’t like the cake chunks, and thought it would be better if it were cheesecake. The cake just seemed average and brought down the flavor.

Last was the Chocolate Caramel Pretzel Crunch which contained a rich chocolate ice cream, pretzel bites, and a salted caramel swirl. Mo and Jackson both made notes about liking the crunch coming from the pretzels. As Jackson put it, “Sweet and savory with a crunch.” I would agree the crunch is fun and this one definitely had the most intense, rich flavor. It’s one of those tastes where you take the first bite and go “WOAH.” If you’re not a fan of chocolate, you won’t like this one.

When it came to picking our favorites it seemed we all had an obvious first and last, but struggled to pick the in-between.

It wasn’t easy picking, but my favorite was the Peanut Butter S’mores Smash, followed by the Vanilla Galaxy Twist, Chocolate Caramel Pretzel Crunch, and the White Chocolate Raspberry Lava Cake.

The flavors were all pretty good, but I would most recommend the Peanut Butter S’mores Smash and the Chocolate Caramel Pretzel Crunch. The Vanilla Galaxy Twist was good but I think you can eat a similar tasting one of another brand for less money. I wouldn’t recommend the White Chocolate Raspberry Lava Cake because of the cake pieces. It was good to try once, but I don’t need it again.

Overall, the new “Tasty” flavors are a lot of fun which I think was the brand’s goal. It was fun to try all the flavors together and if they weren’t so expensive (and unhealthy) I’d do it again.