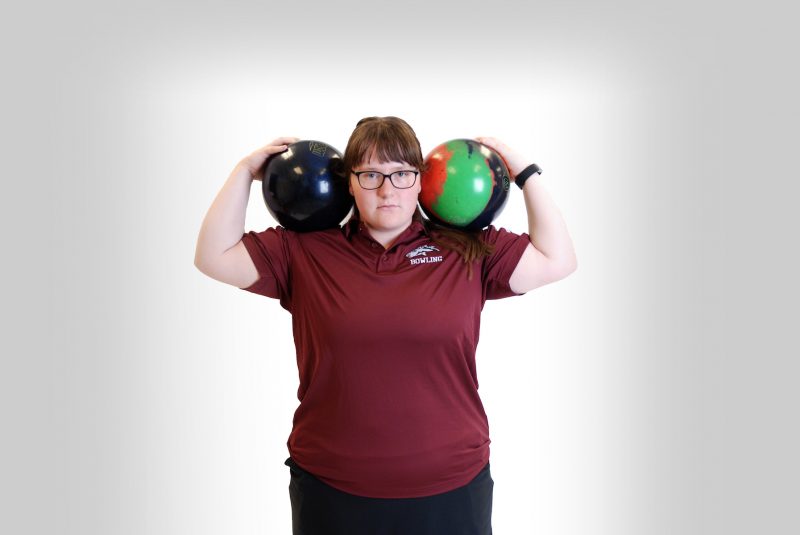 By Abby Koch–Taps echo through the library entryway with a slow metallic beat. The rhythmic percussion gains in volume as it gets closer to the Department of Mass Communication office. All of the inhabitants in the office know that the taps herald the arrival of Mari Pizzini.

Before she enters the office, the office occupants snicker and say, “Here comes the cripple!” They pull their heavy backpacks out of the way to make the area safe to move around.

Standing in the office doorway, Pizzini forces a wide smile to disguise the discomfort she has in her knee. She hobbles into the office on two crutches, joking about how slow moving she is and answering questions about her ACL recovery.

Pizzini, a junior bowler, is one of 200,000 athletes a year who is feeling the after affects of ACL surgery. Taking small steps, both literally and figuratively, are some of the biggest challenges for Pizzini to fully recover.

Pizzini injured her ACL not while bowling but during a game of intramural dodge ball. “I stepped forward and my knee turned out but my foot didn’t,” Pizzini recalled, grimacing while remembering the event. She would further explain the feeling of her knee popping because of how she moved.

She made an appointment the next day with a doctor and discovered she partially tore her ACL. Pizzini, despite the partial tear, would be cleared to bowl.

Katy Burford, an athletic trainer, explained the facts about ACL injuries and who has a higher risk. “Women have a greater risk of tearing the ACL than men because our hips are made for child bearing so that makes our Q angle different, which predisposes [women’s] hormones just in general for more ACL tears,” she explained.

Verywell Fit, a fitness website, explains Q angle as a measurement in pelvic width that is created by two intersecting lines starting from the kneecap. The Q angle in women is three degrees wider than men and is thought to put more stress on the knee joint.

Pizzini’s injury assessment of a partial tear is a rarity. According to OrthoInfo, a website that explains injuries and surgeries to patients, “Partial tears of the anterior cruciate ligament are rare; most ACL injuries are complete or near complete tears.”

Two weeks after discovering she had a partial ACL tear, Pizzini was back in the bowling alley and playing in a tournament. Her game was going strong until she decided to react to a bad shot by jumping. The reaction caused her to fall to the floor in pain and realize that her injury just got worse.

Pizzini consulted with a series of doctors before receiving some dreaded news. “[The doctor] said I’m sorry but you’re most likely looking at surgery; that was all she basically said,” said Pizzini.

OrthoInfo describes what goes into an ACL surgery and the recovery. They say in order to have the return of ACL stability, the ligament must be reconstructed. This requires surgeons to replace the torn ligament with a tissue graft to allow recovery.

Darian Lisle, a double ACL patient, knows the challenge Pizzini went through with surgery. “It is kind of re-teaching yourself how to walk after one surgery on one little ligament,” said Lisle. “You don’t think it is that bad.”

Pizzini had surgery during Christmas break, returning to start her second semester with a set of crutches and a heavy duty knee brace. She also experienced problems with mobility, doing things for herself, and facing mental hurdles. “I’m a very independent person. I hate having to depend on other people for things and not being able to walk, and being on crutches has destroyed my self-esteem,” commented Mari.

Friends, classmates, faculty, and staff have lent a hand whenever they can to help Pizzini’s recovery to full mobility. “Coming here, knowing that I had people that answered ‘yes’ to I’ll help you get food, I’ll help you walk. If you need rides I’ll give you rides, we understand that you can’t drive until you’re off the pain medication. Without them, I would not have come back to school,” stated Pizzini.

Pizzini has been going to physical therapy regularly to get back to good health and back to bowling. Every day she gets a little bit stronger and a little bit faster getting across campus. Pizzini has even gotten to the point where she no longer needs the crutches after five weeks.

Mari Pizzini has one piece of advice for those currently going through post ACL surgery. “Do what your physical therapist says,” stated Pizzini “Don’t do any less and don’t do any more. You do not want to push it but you want to push it enough that you get your range of motion back.”