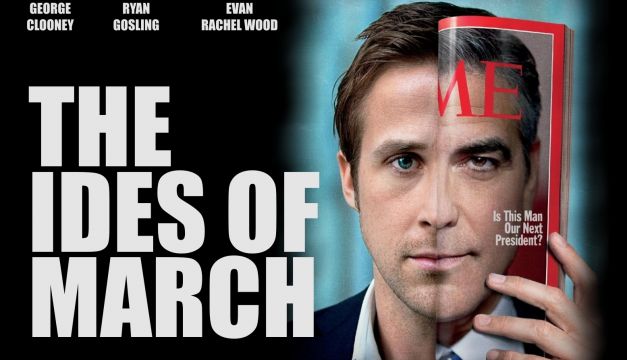 By Shelby Powell–
The Ides of March, co-written and co-starring George Clooney, is a chilling character study masquerading as a political thriller. The film takes place in the midst of an election, following a charismatic governor as he runs for President of the United States. Ryan Gosling, the film’s real star, is something of a wunderkind in the campaign world. He, along with Phillip Seymour Hoffman, run the Democratic governor’s campaign. Evan Rachel Wood, Marissa Tomei, and Paul Giamatti also star.

The Ides of March is dotted with some rather clichéd plot twists that won’t fool even the most casual movie viewer. There are times when the film makes too much of the political thriller genre, leaving it feeling a little stale. When one looks past the silly plot twists, The Ides of March is more about what happens when a young man is drained of the last bits of the idealism he has left. What happens when everything you once thought about your life changes with a simple phone call? The answer is disconcerting.

Gosling has had a string of impressive film roles this year and he is no different in The Ides of March. He throws himself into his role with immense conviction, making the stilted plot twists a bit more forgivable. Gosling carries the movie when Clooney’s character lays the political pandering on a little too thick. Evan Rachel Wood, playing a key supporting player, is unfortunate in every sense of the word. She is meant to play an intelligent, free-spirit but comes off as vulgar and ignorant. The rest of the cast, filled with names familiar to Academy Award audiences, play their roles as deftly as one would expect.

In the end, The Ides of March is worth your time. It has it’s fault, as all movies do, but this is a career making performance by Ryan Gosling. Don’t you want to say you saw it first?