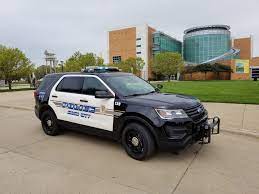 Presented by Sgt. Jeremy McClure of the Sioux City Police Department, the goal of the training was to “Empower students and not create fear,” states McClure.

Morningside hosted two separate sessions of the event in the hopes of getting as many students involved and educated as possible. The event was hosted on an all campus day off, intending to give the students more of an opportunity to attend. Brett Lyon, head of Campus Safety and Security, began the session by addressing the students.

“Unfortunately, this is something that is happening more frequently. It doesn’t just apply to schools;  it could be the mall or anywhere else,” Lyon said before McClure began his presentation.

The presentation itself focused on teaching individuals to have a survival mindset when it comes to situations like these. McClure stressed to the students in the room that there are “No unsurvivable situations.”

The Sioux City Police Department has been giving this presentation all across Iowa to increase awareness of the prevalence of active attacker situations across the United States. In the weeks prior, Morningside University hosted the same set of presentations for the faculty and staff employed at the institution.