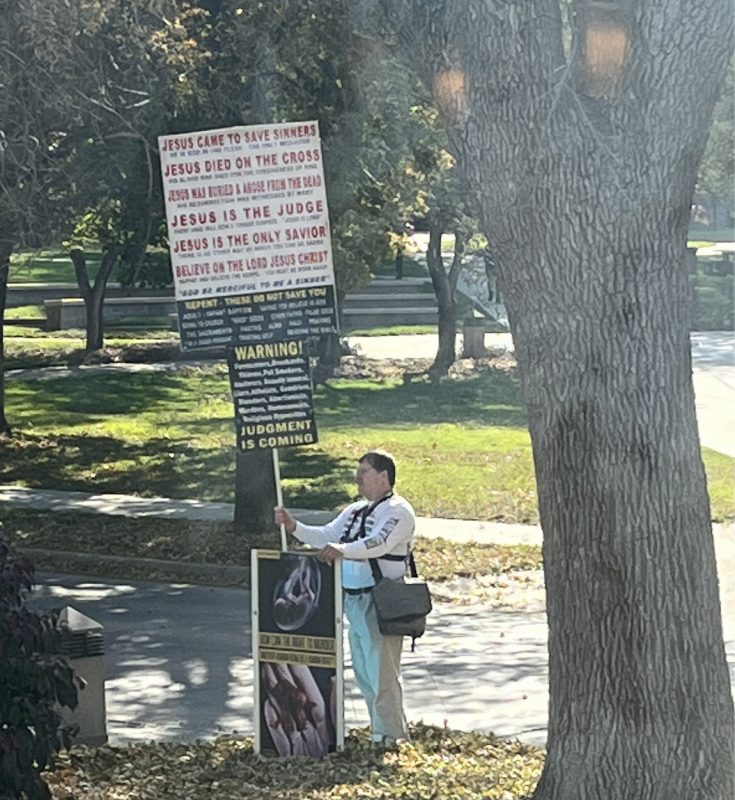 By Payton Miller- Students awoke on Friday, October 21st to a single-man protest outside the Olsen Student Center. The man stayed on campus from 8am to around 4pm when the last classes of the day let out.

The man stood just beyond school property holding a sign that said “Jesus came to save sinners” and “Judgment day is coming.” As students would walk by on the way to class, he would state that Morningside students are “Wicked” and that the school should be renamed “Darkside.”

At 9am campus security arrived on the scene and attempted to remove the man from in front of Olsen. At around 9:15am police arrived on campus and informed campus security that the man was on public property and therefore, was within his rights to peaceful protest.

Brett Lyon, Campus Safety and Security director, responded to the incident. “While we may not agree with the individual that came to our campus, we cannot infringe on his 1st Amendment rights. We are just glad it was a peaceful and civil protest,” he said.

The man was met with mixed reactions from the crowds of students throughout the day. Some would walk past with their head down. Others would gawk as they passed through. One student went as far as to stand in front of the man with a sign that said: “Have a blessed day,” obstructing the mans protester from view.

Because of the Olsen Student Centers’ location at the center of campus, many, if not all, students interacted with the man in some way. Gabe Marthaler, a sophomore at Morningside University, was particularly distraught with the messages displayed on the man’s signs.

“It is deeply upsetting that individuals are stuck in such hateful ideals. I look forward to a future in which such a belief system does not restrain us,” Marthaler said.