Netflix: ‘The Circle’ makes a point

by Mari Pizzini–The start of 2020 brought many new shows and movies to Netflix, including their own original reality series The Circle. With four episodes being released each Wednesday, this show had me on the edge of my seat.

I’ve never really been one to be interested in the genre of reality television. I recently watched my first ever episode of The Bachelor (crazy, I know), but The Circle’s description centered around something I did find interesting: social media.

It was that concept that caused me to press play and watch the first four episode’s consecutively.

I was hooked by the first episode. Joey’s Italian-American mannerisms, Sammie’s self-love, Chris’ religious honesty, and Shubham’s social media-virginity immediately made me want to know the players.

I applaud Netflix on their attempt to reign in another crowd because this show, though there are plenty of catfishes, teaches love and loyalty.

The setup is this: characters live in a (fabulously) furnished apartment alone while creating a social media profile on the Circle. They never meet the players face-to-face in the game. They are tasked with rating each one by the pictures and statuses they post, in addition to their group messages and private conversations.

While watching, the show became a case study in social media. Is merely speaking through text enough to convey personality or emotion? Can you make it to the top by pretending to be someone else?

Who can you trust?

That latter question was asked continuously throughout the season. Near the end, both Sammie and Chris were questioning their alliances and Rebecca’s character. So, in the social media world, it’s really hard to trust that people are who they say they are. Especially when $100,000 is on the line.

Again, I give my kudos to Netflix. The Circle surprised me, and it’s chaos and crazy characters may have kept me around at first, but the people’s fears, worries, and self-interpretations were what kept me on the edge of my seat to the end.

With that being said: Circle, please move this new Netflix series to my number 1 spot in the rankings (and for those of you who have yet to watch, that means I’m giving the show an 8 out of 8).

Mustang Swim Split Against Midland
Netflix: What’s up with ‘You’? 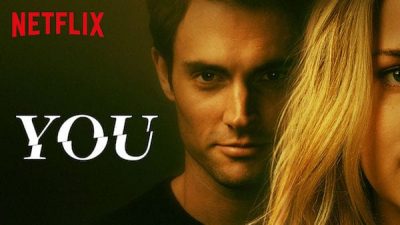