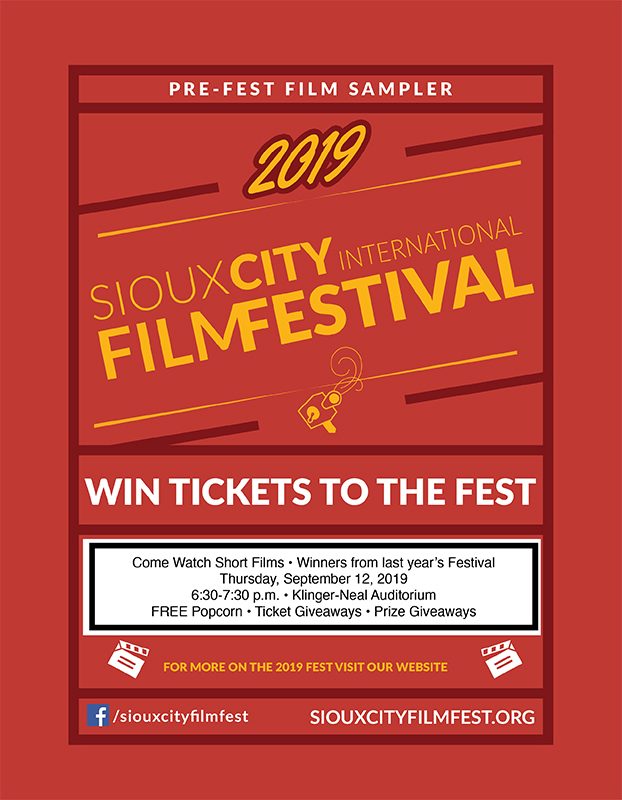 by Dylan Ferguson-The Sioux City International Film Festival (SCIFF) has provided filmmakers and fans the opportunity to showcase and enjoy both short and feature length films of several genres from around the world. This year, to help gain interest in college aged film fans, the festival organizers will be holding a “pop up” film festival at Morningside College on Thursday, September 12th at 6:30pm in Klinger Neal Theater.

Leslie Werden, Morningside English professor and board member of SCIFF, explained that the idea for the pop-up festival came from other film festivals that use smaller “pop up” events. Werden described the “pop up” festivals giving more casual film goers a taste of what to expect at the festival proper. She stated that “in 15 years of the Sioux City Film Festival, we have continued to draw in the same crowds when really the films that we bring in would be much better for a wider audience.”

Additional pop-up festivals will be held on the campuses of Wayne State University and the University of South Dakota. Each festival will last around an hour and will showcase three of the 2018 festival award winners. While the specific films have not been announced, goers should expect a film that uses a blend of live-action and animation, a drama, and a comedy. Werden stated that the three films “will appeal to this age group because of the realism and the comedy”.

Admission to the “pop up” festival is free, popcorn will be provided, and prizes will be given away to lucky festival goers. Prizes include festival SWAG and tickets to attend SCIFF.

The 2019 Sioux City International Film Festival will take place October 3rd-5th at the Promenade Cinema in downtown Sioux City. The theme for the festival this year is “Women in Film”, and will feature workshops from filmmakers Sarah Nichole Jones, Rhiannon Koehler, Patricia Meyer, and Deborah Kampmeier in addition to 13 blocks worth of film screenings. Ticket options include passes for single screenings, festival passes, and VIP packages.