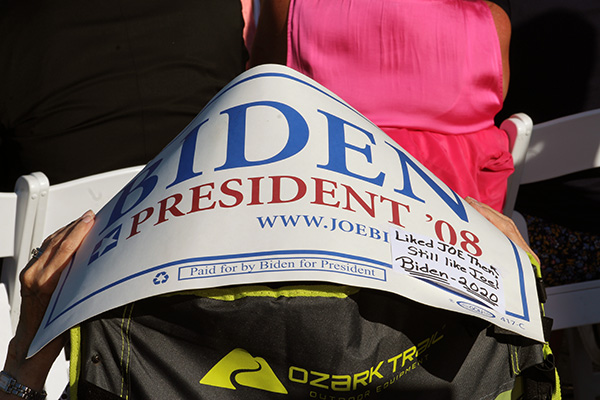 by Mari Pizzini–Former Vice President Joe Biden’s campaign led him to a hot and packed community event in Sioux City July 16. The sun beat down on the crowd at the Country Celebrations Event Center as Dylan Green, Biden’s Iowa organizer, worked to fire up the people.

“Ready for Joe!” the crowd answered.

The outdoor venue allowed people to sit in white folding chairs near the stage, but many more packed in behind the media risers in the shade. Spare chairs had to be pulled from inside to allow people to sit.

Biden trotted up to the stage with his signature sunglasses covering his eyes. Following the applause, he apologized for the glasses as he stared into the sun and launched his speech.

“It’s a delight to be here. This election for president is different than any in our lifetime. The soul of the country is on the line here,” Biden began. “We are in a battle for the soul of America.”

The crowd was solemn as Biden discussed the importance of the president as the face of the nation.

“Our children are watching. He’s the role model we want for future generations. People look to him or her, whoever it be. And it does matter.”

Biden said he will be a president for all the people, no matter their background or race. With his ideas on healthcare, to build upon and protect the Affordable Care Act, Biden stated he will work to provide coverage for America’s backbone: the middle class.

“It’s all about hope. About being able to communicate some sense of hope for your family. Folks, we need to finish the job on Healthcare,” he said. “Healthcare is a right, in my opinion.”

He detailed his ideas to include a public option into Obamacare. This would allow anyone to buy into the system and receive Medicare. His plan included the idea of more than just quantity care, but quality care.

He briefly mentioned the idea that he intends to provide free community college education to every qualified individual. He also stated that he planned to change taxes for the top one percent.

“We choose science over fiction. We choose truth over lies. We choose unity over division. There is not a single thing we can’t do if we do it together.”