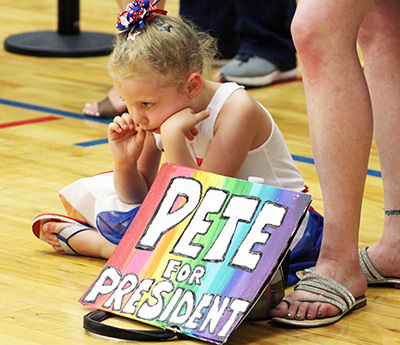 by Abby Koch–South Bend, Indiana, Mayor Pete Buttigieg’s energetic campaign made a stop in Sioux City July 3 to make an impression on Iowa voters. Buttigieg is one of the youngest democrats on the campaign trail, but youth is not holding him back from connecting with Americans.

“Mayor Pete” took part in the first democratic debates in late June. Buttigieg made an impact with American voters due to his stances and beliefs on issues. Buttigieg brought the impact he made at the debates back to Iowa to earn their key support.

Before taking the stage, Buttigieg was given a warm welcome from Big Brothers Big Sisters of Siouxland executive director Kristie Arlt. Arlt introduced Buttigieg by mentioning his and the city’s strong ideals of service to the community.

Buttigieg was met by loud applause from the crowd and opened with how democrats would win the presidential election. The mayor stated that the only way to win was knowing how to change. His change is seen as knowing that the times are different and know when things are not working.

Buttigieg talked about how he was different, comparing his political experience to Trump’s. He explained that his decisions in 2020 will have a positive effect in 2050.

The Indiana mayor highlighted quickly on key issues. One of the major issues was healthcare. “Healthcare is absolutely a part of America freedom,” he stated.

Buttigieg spoke about his time in Afghanistan as a service member and the bond to get the job done. “The question is how we can create that common bond without going to war,” said Buttigieg.

He proposed to close divides by dedicating Americans to serving communities. The proposal was a three–step plan: tripling the pay of service positions, looking to communities for solutions, and increasing the number of people who serve the community for a full year by 2026.

Buttigieg then turned the microphone to the people to answer questions. One of the first was to expand a little further on his service plan. He said his proposal would help make service less of a luxury and making it competitive with grants. “We want to challenge American communities to create their own service projects,” he explained.

Gun control was also on the mind of a young Iowan in fear of school shootings. Buttigieg spoke about how there are certain weapons that do not need to be for sale. He also pushed his belief in universal background checks and not handing weapons to unstable citizens. Buttigieg complimented the questioner, saying, “One of the things that is changing the conversation is raising your voice and asking what are you going to do.”

Abortion is also on the minds of Iowan voters. Buttigieg stated he was pro choice and explained that men need to stand with women and their decision. “It is one of the most challenging decisions that she can make,” said Buttigieg. “What doesn’t make it easier is the government telling her what to do.”

The Indiana mayor closed out joking about the hope people brought in an intensely heated high school gym. Buttigieg said that this hope is needed to make things different in America. Buttigieg confidently closed by saying, “We are going to change the channel.”