Home » You Thneed to See The Lorax! 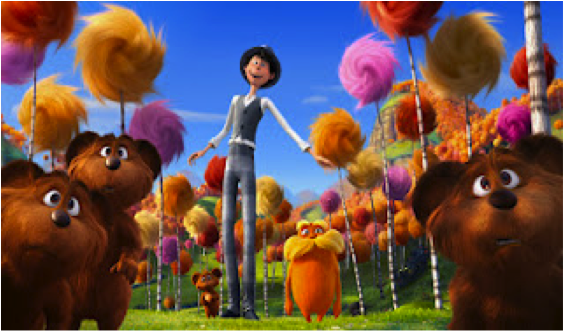 You Thneed to See The Lorax!

By Emily L. Domayer ~ Dr. Seuss wrote The Lorax in 1971. Forty-one years later, now on the big screen, it is still just as relevant to our culture. Between oil spills and too many plastic bottles, The Lorax hits home to everyday America.

The movie successfully keeps the whimsical “Seuss-ness” of all the creatures in the book. There is a trio of singing fish who walk on their tailfins. There are fuzzy-looking bears that gorge themselves on marshmallows.  The birds have round bottoms and awkward looking wings.

Chris Renaud, who also directed Despicable Me, directs the movie. The Lorax is not preachy with its message that “unless someone cares,” things will not get better. It gently stresses the importance of taking care of the world’s natural resources, using the (mostly) friendly characters as a guide. It also reminds us that we live in a world of excessive commercialism, and that greed is a very destructive force.

Ted Wiggins (voiced by Zac Efron) is on a mission to find a tree. Ted, a likable 12-year old, wants to impress Audrey (Taylor Swift), a girl who wants a real tree for her birthday. This is a difficult task because Ted lives in Thneedville, a fake “utopia” where everything is bought and sold, even air. Trees are plugged in, and a person can change the season of the tree with a remote.

Ted seeks advice from his grandmother (Betty White) who tells him he can get a tree by visiting the Once-ler. He has to bring a few tokens that serve as a password, including a great-grandfather snail. Finding the Once-ler’s shack takes Ted on a dangerous trip out of town.

The Once-ler (Ed Helms from The Office) admits to Ted that he, the Once-ler, is to blame for changing Thneedville from a lush, forested area to a sterile, plastic world. The Once-ler chopped down the truffula trees to mass produce his “Thneed”, a product that people thought they needed. When the first tree was chopped down, the Lorax, guardian of the forest, (voiced by Danny DeVito) suddenly appeared. The Lorax, along with the other forest creatures, tried to stop the Once-ler from cutting down the tree. Unfortunately, the Once-ler, who was fueled by greed, didn’t listen.

When the Once-ler has finished telling his story, he gives Ted the last truffula tree seed to bring real trees back to Thneedville. Ted holds onto the seed as best he can, but Mr. O’Hare, who hates trees, watches him. O’Hare is an air tycoon. He sells air because he believes that “if you put something in a plastic bottle, people will buy it.”Since trees make air during photosynthesis (for free), O’Hare sees trees as competition. O’Hare chases after Ted, trying to stop him from planting the seed. Audrey and Ted’s grandmother work together to help Ted find dirt, where they can plant the seed.