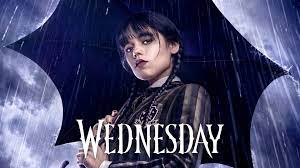 by Payton Miller–The Addams family returns to our screens this past Wednesday as Netlix releases a new original series “Wednesday.”

The long-awaited 8-episode series stars Jenna Ortega as a teen-aged Wednesday Addams. Netflix announced its intentions to take on the project in August of 2021. Fans have been awaiting its release ever since. The goal was to create a continued timeline from the original 1964 “The Addams Family” sitcom to a now grown-up Wednesday.

While the series focuses on Wednesday as our main character and features Thing as her dedicated sidekick, each of the original characters of the family that viewers love so much make an appearance at various points throughout the episodes.

Morticia, Gomez, and Pugsley Addams appear the most throughout various episodes. Uncle Fester makes an appearance to help Wednesday unmask the mystery that plagues the student of Nevermore.

Our story begins at Nevermore Academy, where Wednesday has been sent in the hopes that she can find a sense of belonging with other students that have been deemed outcasts of society. Throughout her time in school mysteries unfold concerning the long history of outcasts in the small town of Jericho.

The producers maintained the feel of the original show while still creating a show that felt new. Small details pulled from the original three iterations helped pull longtime fans of the Addams family into the new storyline.

For long time fans of the Addams family or new generations of viewers, Wednesday is a binge-worthy experience for all.