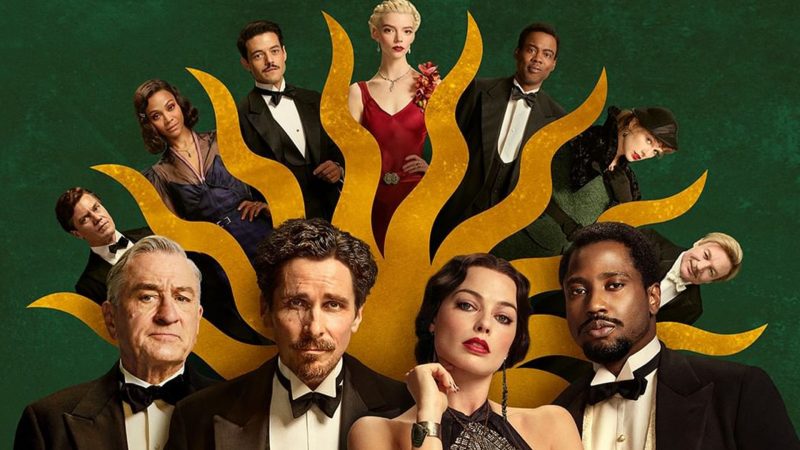 By Rena Ketelsen – Amsterdam (2022) is a very peculiar, funny movie with powerful, compelling performances from actors such as Margot Robbie, Christian Bale, and John David Washington.

The movie, directed by David O. Russell, was released on October 7. The cast is star-studded including names like Robert De Niro, Anya Taylor-Joy, Rami Malek, and even Taylor Swift.

The film is set in the 1930s and follows a group of three friends, two of which witness a murder and become suspects. As they try to clear their names and discover what was really going on, they run into their third friend who gets involved as well. They end up uncovering a terrible, outrageous conspiracy.

Plot twists and unexpected turns that the story takes keep the movie interesting throughout the full 2 hours and 14 minutes. The audience never knows where the story will go next.

In addition to that, the colors, locations, and costumes paint a beautiful, convincing, and partially dark picture of the time that this movie takes place in.

One thing that stands out above all of that, however, is the acting. As one can expect from a movie that has as many big, great actors as this one, the performances are exceptional. Each one of them is unique and peculiar, but beautiful at the same time. The powerful performances pull the viewer in and don’t let them go again until the very end of the movie.

These convincing performances paired with a great script give life to the characters whose personalities and relationships add another layer to the plot and the movie in general, making the film absolutely hilarious and fun to watch.

At the same time, however, that is also why this is a rather specific movie that not everyone will like. None of the characters are without flaws which becomes evident very quickly. For instance, Burt Berendsen (Christian Bale) is a doctor who helps poor people. He certainly has good intentions, but he is an absolute mess and doesn’t quite seem to have his own life under control.

Apart from those flaws or perhaps because of them, this film is riddled with problems of the sort that are very emotional and personal. They require time and communication and even then, some cannot be solved. But that makes this movie much more interesting and relatable.

The film is certainly not made to be light entertainment, but the depth of the plot and characters are what make it great.