Home » No one wants crunchy cheese! 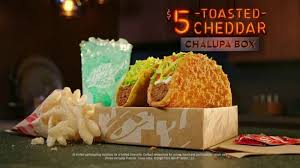 No one wants crunchy cheese!

by Kassidy Hart–Over the years, I have become a total fanatic of Taco Bell’s $5 boxes and limited–time items. I think it started way back when they had their infamous Baja Blast, and it evolved into a staple T-Bell drink.

Plus, I’m a poor college student and a $5 dinner is a good deal. So, whenever they have a limited time item in a $5 box, I have to try it out. The newest of theses boxes includes a toasted cheese chalupa.

This box, like most of them, included cinnamon twists, a hard-shell taco, a drink and, of course, the limited time item.

Let’s start with the reliable items. Cinnamon twists are usually what seal the deal for me. If I don’t like the main item, at least I know I will have a cinnamon-y treat to munch on. Hard shell tacos are basic, sometimes I switch them out for a soft-shell taco, but they are a good item to stick in the fridge for lunch the next day or a midnight snack. And I’m sure you could guess my go–to drink is the tropical flavored Mountain Dew Baja Blast.

Now, for the item you’ve all been waiting for: the toasted cheese chalupa.

In all honesty, it was not the most amazing thing I’ve eaten. It could have been because of the 15-minute timespan it sat in between being given to me and when I actually ate it, but I doubt it.

Before I ate it, I thought it would be warm with melted cheese on the shell, but the shell ended up being hard and so was the cheese. It reminded me of the nachos that I learned to make in my middle school family consumer science class, where you heat a plate of tortilla chips with shredded cheese on top for 30 seconds in the microwave. If you let them sit for even a minute, the cheese would start to harden and then you’d be left eating crunchy cheese.

And no one wants crunchy cheese.

Not all limited–time Taco Bell items are a disappointment, my top being the $1 potato-ritos they had back in 2018. But it is always a surprise and many of them are items that should have stayed a thought.

In my opinion, the toasted cheese chalupa was one item that could have stayed a thought and wouldn’t have been missed, along with things like the naked chicken chalupa and the nacho fries.

I give it 1 star out of 5, only because it was more tolerable than some of the other items I’ve tried. But I definitely ate the cinnamon twists last to end my dinner on a more positive taste.