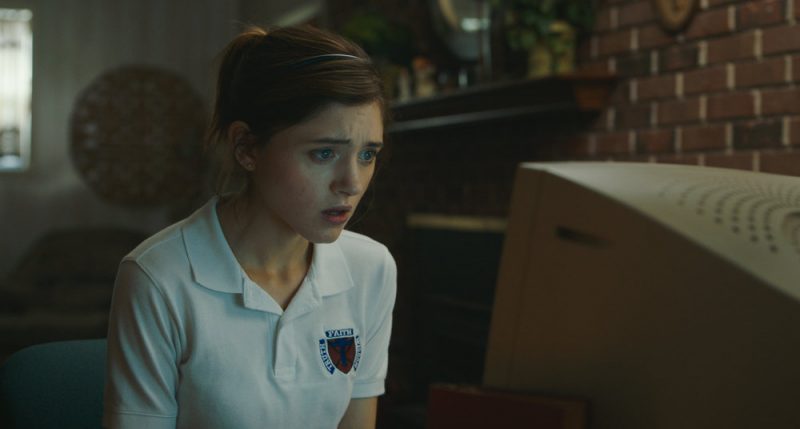 No, please, no. That was my reaction while watching Netflix’s film Yes, God, Yes. I went into this film knowing it was rated R and had something to do with the main character, Alice’s, coming of age, but I was just a little thrown off by the whole thing.

The movie starts with Alice at her private Catholic high school. Almost immediately, we see her in a class called “Mortality” where the teacher tells the class that premarital sex leads directly to damnation. Not even ten minutes in and I had already rolled my eyes.

While in the cafeteria, Alice and her best friend Laura hear about a weekend retreat known as Kirkos that is top secret except to those who attend. After hearing that it “changed her life” from their acquaintance Beth, the girls decide to attend the retreat which is put on by their school. There they find themselves engaging in small group discussions, full group confessions, and more threats of damnation! That should have been the title of this film.

As the movie continues, Alice becomes the butt of the school’s biggest rumor, and even her teachers decide she is guilty. While trying to prove her innocence, and engaging in some questionable online activities, she loses her best friend and the trust of her cabin leader.

The only truly good thing about this film came when Alice snuck away from the retreat and found herself in a bar. The bar owner, who happened to have been Catholic growing up, showed Alice that maybe everything she has been hearing from her teachers wasn’t necessarily true. Alice then rides back to her camp on the back of the bar owner’s motorcycle. Classic.

The final redeeming quality of this movie comes when Alice calls out the Father in the final scene. Honestly, we need more girl power and courage in movies like these.

Despite those two scenes, every uber-religious trope was thrown into this movie. Outrageous rumors about the innocent, sixteen-year-old girl? Check. Lacking and just plain incorrect sex education? Check. Constant fear of going to hell for eating an entire container of gumballs (or really just anything)? Also check.

To top it all off, the father and main Catholic retreat leader are both hypocrites caught in the middle of sexual acts. I think what really decided how I felt about this movie was just the lack of respect for religion. However, I would also be a hypocrite to say that the events in this movie had never happened before. And maybe that’s truly where the problem starts.

Anyway, I give this movie 4 nights at a Catholic retreat out of 10. I didn’t hate it, but I won’t be watching it again.

Get Crafty With it!
Wurth deems Period Poverty Campaign a Success