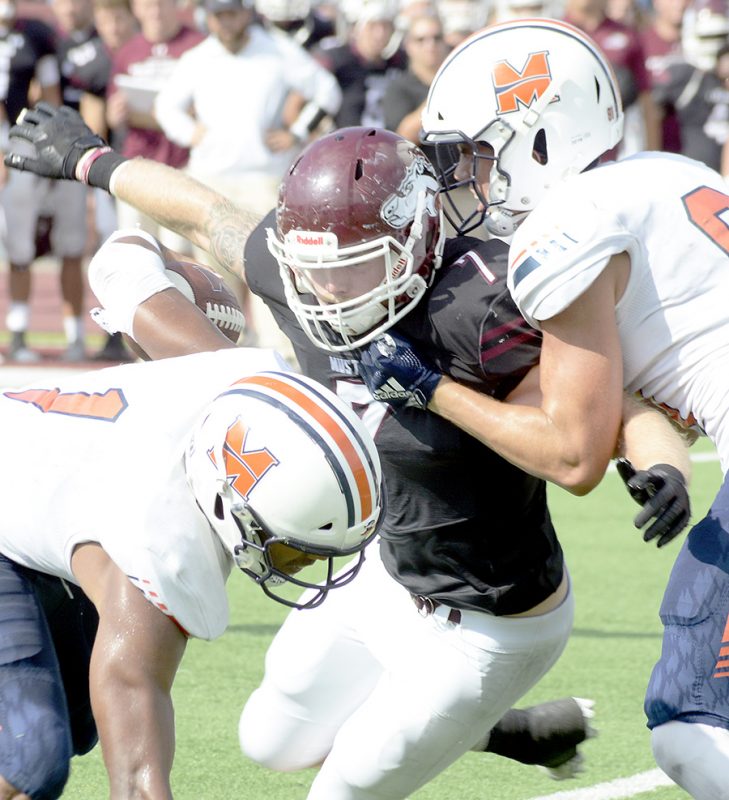 by Steven Cutler–Midland came to play.  Just not until the second quarter.

Morningside’s biggest challenge yet came to Olsen Stadium for the 125th Homecoming celebration. Midland has certainly given Morningside all they could handle in recent years, though they have never been able to pull off a win. The Warriors are now 0-14 in the contest history.

Midland came in to the contest receiving votes to be ranked, and coming off a heart breaking loss to then #11 Northwestern in which they led the entire game up until NWC hit a last–second field goal to win it.

If it weren’t for some stagnant offense in the first quarter, Midland would’ve made this game a lot more uncomfortable for the NAIA’s top–ranked team.

Another factor that proved to be detrimental for the Warriors was the Mustangs’ passing attack. Despite throwing his first three interceptions of the season, Joe Dolincheck still threw for an impressive 471 yards and six touchdowns.  Both stats were tied for single game, all–time records.

Reid Jurgensmeier went absolutely off, catching the ball nine times for 266 Yards and three touchdowns. Jurgensmeier’s yards were good enough to tie for sixth in school history for most single game receiving yards.

After giving up two touchdowns through the air, and getting sacked for a safety in the first Quarter, Midland got the offense going in the second, trading scores with the Morningside offense.

After starting the season as a backup, Payton Nelson came in to start the game at quarterback and led a balanced Midland attack to 378 yards of total offense on the day.

Nelson’s speed and out-of-the-pocket abilities made him a difficult back to get after in the backfield for a usually very dominant Morningside Defense.

Although overshadowed by Dolincheck and Jurgensmeier’s air attack, the Morningside rushers put together a productive day, totaling 172 yards on the ground.  Ponder led the Mustang ground crew with 119 yards of rushing on 27 attempts.

Ponder has covered at least the century mark in all three games so far this season. The junior running back is currently fifth in the NAIA in rushing yards per game at 150.

Jacob Katzer had another monster game for Morningside. The senior finished with 12 tackles, one sack, 2.5 tackles for loss, forced and recovered a fumble as well. Klayton Nordeen dominated in the secondary as well, intercepting his second pass of the season and breaking up another.

Morningside will have their second and final bye week of the season next week before hitting the road to play Hastings. Midland will play their second non conference foe when they welcome Missouri Baptist from the Mid-States Football Association.