Home » No. 1 Mustangs down Dordt 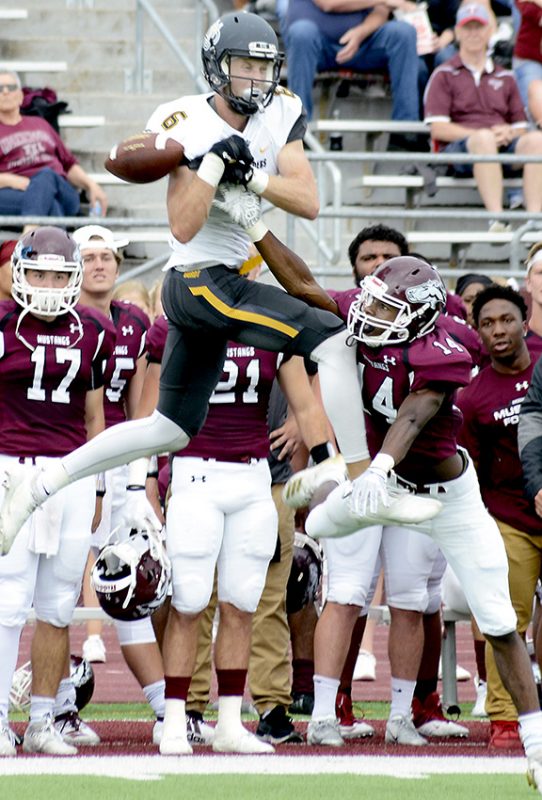 No. 1 Mustangs down Dordt

by Jonathan Covert–The number one NAIA team in the nation defeated #24 Dordt 56-14 in a GPAC season opener.

The Mustangs put on a dominating performance, outgaining the Defenders 626-315 and winning the turnover battle 2-0. The game was Morningside’s 35th straight GPAC victory, as well as 31 consecutive regular season wins.

The first quarter began with a bang just 1:30 into the game. The Dordt Defenders would strike first with an 8o-yard touchdown pass from Tyler Reynolds to Eli Boldan.

Morningside would answer the Dordt strike with one of their own on their second drive. An 11–play, 96-yard drive was capped off by sophomore quarterback Joe Dolicheck finding Austin Johnson for a 13-yard touchdown. The Mustangs would see the end of first quarter end with a 7-7 tie.

Arnijae Ponder would find the endzone twice in the second quarter, with runs of 23 and 99 yards. Ponder’s two drives pushed the score to a 21-7 lead.

The 99-yard run by Ponder was the longest run in Morningside history. The previous long was a 93-yard run by Blake Anderson. Anderson’s run happened against Northwestern back on September 13, 2008.

The following series saw the Defenders driving into Morningside territory. The drive ended abruptly when Joel Katzer intercepted a Kaleb Maresh pass, returning it 64 yards for a defensive touchdown.

Backup quarterback Tate Robards would come in and go 3/3 for 58 yards and a touchdown pass to Tupak Kpeayah. Dordt also found the endzone when Maresh found Jake Dodge for the 6-yard touchdown pass. The final score was Morningside 56 to Dordt 14.

The team leaders were Ponder rushing for 216 yards, and Dolincheck passing for 279 yards and two touchdowns. Bo Els caught 8 passes for 76 yards. The defense was led by Katzer with 8 tackles, 0.5 sacks, 1.5 tackles for loss and a 64-yard pick six.

The Mustangs (2-0, 1-0) return home next Saturday for homecoming as they battle the Midland Warriors (1-1, 0-1). The game starts at 1:30pm with homecoming festivities beforehand.