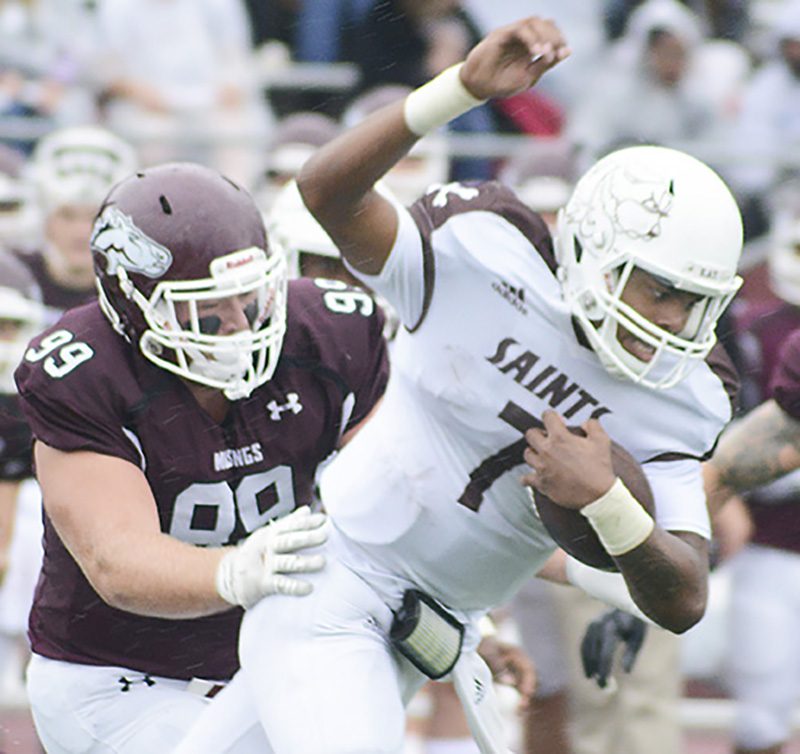 by Steven Cutler--A dominant defense, a relentless offense, and a strong special teams unit led the top-ranked Morningside football team to an 80-0 over Saint Francis (Ill.) in the season opener Aug. 31.

There were many questions about the defending NAIA national champions going into the game. Many revolved around the offense and what it would look like without graduated seniors Trent Solsma and Connor Niles.

Sophomore quarterback Joe Dolincheck, junior running back Arnijae Ponder, senior wide receiver Bo Els, and the rest of the Morningside offense answered those questions with a dominant performance against USF.

The Mustangs also return the bulk of one of the nation’s top-rated defenses from 2018.

The defense held St. Francis to only 202 yards of total offense and no points, despite two Saints trips to the red zone. Morningside added two defensive touchdowns, with both Klayton Nordeen and Chase Nelson returning fumbles for touchdowns. Nordeen also had an interception.

Morningside opened the game with a four-and-a-half-minute drive that resulted in Ponder rushing for a touchdown and a 7-0 lead.

After the defense held Saint Francis to a three and out, Dolincheck completed a 40-yard touchdown pass to Bo Els for a 14-point lead.   Nelson ended Saint Francis’ next drive by stripping the ball and returning it for a touchdown.

Dolincheck’s second touchdown pass of the day, this time to Reed Jurgensmeier, extended the lead. On their next drive, the Saints fumbled the snap on a punt, and Ponder ended the first quarter by scoring from the 1-yard line.

The Mustangs’ special teams unit began the second quarer by blocking a punt for a touchdown. Dolincheck and Els would connect for two more touchdown passes to close out the half.

Morningside opened the second half with Dolincheck completing his fifth touchdown pass, this time to senior Addison Ross, making the score 63-0. Freshman kicker Chase Carter followed the touchdown with a 29-yard field goal. Nordeen returned a fumble for a touchdown to give Morningside a 73-0 lead.

QB Tate Robards entered the game in the third quarter. He hit Logan McGill with a 7-yard pass and Morningside walked away with an 80-0 victory.

Offensively for Saint Francis, freshman quarterback Major Dedmond was 13-28 for 150 yards through the air. He also led the Saints in rushing with 61 yards.

For the Morningside defense, Jacob Katzer led with 11 tackles. Nelson finished with three tackles and a fumble recovery for a touchdown. David Rios and Joel Katzer combined for a sack, and had six and five tackles respectively.

Morningside now has an early season bye week before opening GPAC play against #24 Dordt back in Elwood-Olsen Stadium on September 14.