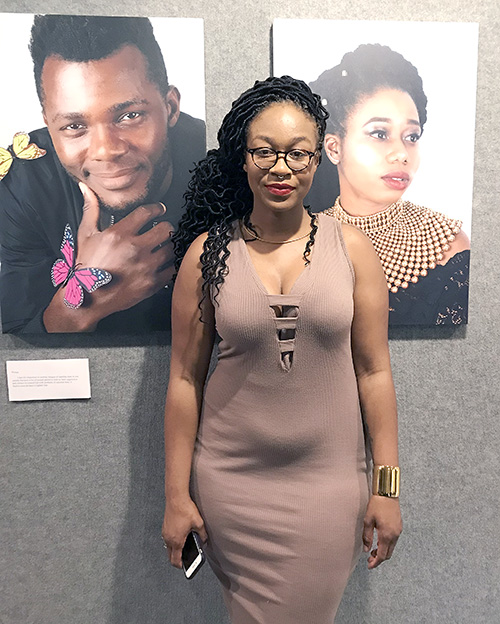 “This exhibit is about not being scared of who you are.”

by Maggie Ganley–Jesseca Ormond is challenging Morningsiders to think deeper about societal stereotypes.

Jesseca’s Summer Undergraduate Research Project (SURP), on display in the library, focuses on breaking through the boundaries of gender stereotypes in society.

In society, women are typically perceived as soft and feminine while men are seen as aggressive and in charge. In order to contrast societal gender norms, she decided to flip these roles.

During each photo shoot, she asked her subjects why it’s important to have representation in their images and what this project means to them. She explained to her subjects that, during her exhibit, their response would be placed next to their pictures. Therefore, they had to believe in her message in order to participate.

She felt compelled to bring this exhibit to Morningside’s campus because, “Where I’m from in the Caribbean, toxic masculinity is a big thing. And here at an athletic-based school, it’s kind of the same thing,” she explained.

This “macho complex” showed when she tried to find subjects in Antigua to photograph. When she asked men if they’d be willing to photograph with flowers and butterflies they typically responded with, “Oh, I’m not doing that.”

Although some people were scared of what the project would mean for them and their reputation, Julio Torres, a major in Social and Behavioral Science, believes this exhibit is about not being scared of who you are.

To him, this exhibit means not being afraid of being feminine as a man, even if society tells you differently. He believes this exhibit is a good form of representation and should be shown more throughout society because strict gender stereotypes can have harmful effects.

“If society says a woman should just be womanly, it’s going to cause them to be dependent on everyone else. If men are supposed to just do manly things, they’re going to be emotionally distant and keep everything in, which leads to toxic behavior such as alcoholism and drug abuse,” Julio said.

Kaycie Strobl, a student who took part in the project, echoes Julio’s sentiment.

Jesseca decided to have her exhibit on display to start a conversation, she didn’t want her research project to fall by the wayside after the summer was over.

Jaclyn Arens, a senior, believes it’s important to have this display in public and get people thinking.

“I think this photo exhibit is important for someplace like Morningside, because we aren’t challenged that much on our views and what we see. I think this is a really important exhibit to make people think about gender stereotypes,” Jaclyn said.

Dolie Thompson, Jesseca’s faculty advisor for the project, is proud of the work Jesseca has put forward.

“This project means that I have a student who is serious enough about her work to put in many hours of making portraits, interviewing her models, critiquing, editing, and printing for the final show. The work effectively questions our stereotypical views of masculinity and femininity, something we need to fix in our culture. Jesseca’s work influences other students by setting the bar higher, challenging them and promoting awareness of the multitude of possibilities for them. I care a lot about having examples of good photography to show my students, and when the photos are done by one of their classmates, it is even better,” Dolie said.

Jesseca’s entire motivation behind applying for a Summer Undergraduate Research Project was fueled by her passion for photography and her desire to spark societal conversations.

After it’s time is done at Morningside, her photo exhibit will move to Antigua and will be on display in December, making this an international project.