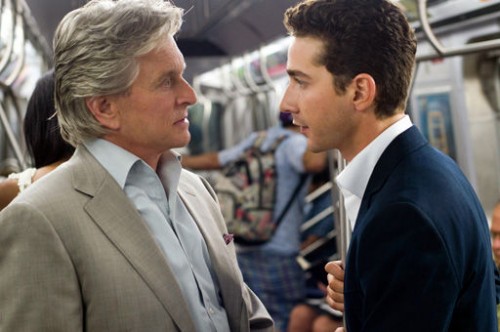 By Shelby Powell–
Wall Street: Money Never Sleeps was not met with critical acclaim following its wide release in 2010. Coming as a sequel almost 20 years after the first film, Wall Street 2 didn’t find the audience it needed.

Because the film took place in the weeks before the massive collapse of the U.S. economy, it might be partially blamed on sore wounds. The country was still too close to the collapse to want to relive a fictionalized version of it. Now five years after the initial crisis, Wall Street: Money Never Sleeps deserves a second look.

Part escapism and part anthropological study, Wall Street: Money Never Sleeps stars Shia Labeouf as Jacob Moore. Moore is a young, charismatic stock broker with an affinity for numbers and a close relationship with his mentor Louis Zabel (Frank Langella). Carey Mulligan, known for an Oscar-nominated turn in An Education, plays Winnie Gecko. Winnie is Moore’s significant other and the estranged daughter of Michael Douglas’ iconic character Gordon Gecko. Set against the backdrop of the economic downturn, the viewer is given an inside look in the minds of greedy people that will do anything to stay on top of the heap.

Wall Street: Money Never Sleeps is a much better film than anyone gave it credit for. Labeouf, famously known for starring in the Transformers trilogy, is a shockingly talented actor. He brings authenticity to his character that might not have been there otherwise.

Director Oliver Stone plays on the real life emotional turmoil of his actors, making the emotion incredibly raw. Carey Mulligan is an unfortunately stereotypical version of a young girl with more daddy issues than fingers. She’s left as nothing more than a two dimensional plot device. Michael Douglas, however, is a sight to behold as Gordon Gecko. For someone who had never been exposed to the first film, Douglas is chilling.

If you’re willing to wade through some confusing stock talk, Wall Street: Money Never Sleeps is certainly worth your time.