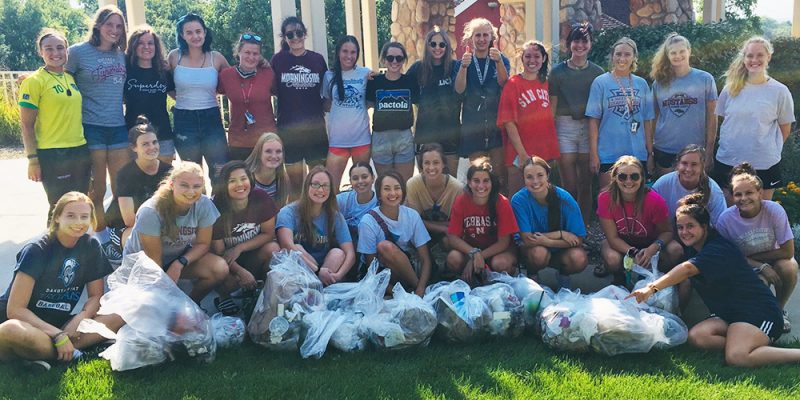 by Kassidy Hart–This semester, Morningside Soccer has decided to keep campus clean by picking up trash every week.

“We meet once a week at the clock tower, hand out trash bags and gloves to pairs of players, then have them scatter for 30 minutes around campus to clean up. Once they come back, we take a picture of the progress and toss the trash in the dumpster,” Soccer Coach Tom Maxon said.

The project was initiated at the beginning of the semester by freshman Taylar Johnson. Johnson noticed the litter on campus getting progressively worse as she walked to her classes. When Coach Maxon brought up team bonding activities at practice one night, she took the opportunity to pitch her idea of picking up trash.

“I live by the quote ‘there is no planet b.’ I wanted to do it because it is the right thing to do. Being a freshman made it hard for me to step up and put out the pitch to do it at first because I was afraid my teammates might not agree or like my ideas. But, it wasn’t hard to get them on board!” Johnson said.

Maxon loved the idea of helping out on campus and saw it as a chance to give back to the community. The two then then asked Pastor Andrew Nelson, the Director of Campus Ministry and Community Service, how they could execute it.

“I helped the team coordinate with Tim Paul and the amazing folks in Facilities who were both very helpful in providing supplies as well as very grateful to the team for giving back to campus in this way,” Pastor Andy said.

Cleaning up campus not only helps out the Morningside maintenance team but also helps the teams’ players bond outside of soccer practice and games, building the teams’ chemistry.

“We pair up in different groups with people who we don’t typically talk with or hang out with very often, so we can get to know each other a bit more. And the better we get along, the better we can play together on the field,” junior soccer player Avery Henderson said.

For years, Coach Maxon has tried to get his players involved with the community in different ways. One year the team even tried the idea of a “Supporters Club”.

“Two years in a row we divided out the players to attend all the other sporting events on campus and had them go crazy with signs and cheers. But it was hard attending every event because these students are busy with classes and jobs on top of being committed to soccer,” Coach Maxon said.

So far, the project has proved to have vast benefits for the team and the campus. Many have expressed their hope to see the project inspire other teams to get involved and passionate about helping out the Morningside Community.

“I would love to see this project expand further than just the soccer teams and campus. Not only is it a great way to bring your team closer but it also makes the area around where we live look nice. I love that our school does ‘Into the Streets’ but I would love to see our school give back more than just one day a year,” senior soccer player Morgan McLaughlin said.

The project is low time commitment and cost but high impact on the place Morningside students call home.