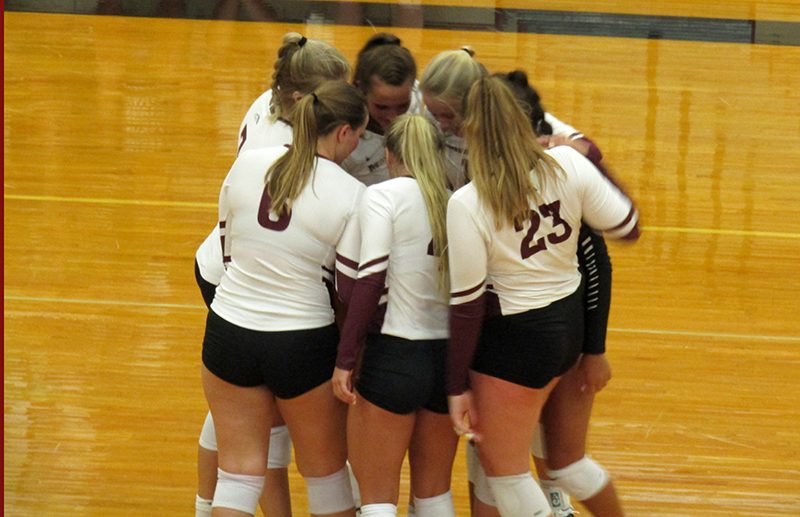 by Daniel Ver Steeg--Morningside’s GPAC volleyball season began Wednesday (9.4) in Allee Gym as the Mustangs welcomed the College of Saint Mary. The Flames went home with a 3-2 win.

The Flames came in with a 10-3 record, but on a three-game losing streak. Morningside came in with a 7-1 record, and after picking up the GPAC Defensive Player of the Week honor for sophomore libero Kayla Harris.

The first set did not start the way Morningside had hoped, giving up many runs to the Flames, who blocked every offensive attack by the Mustang hitters. The set went back and forth with neither team getting a grip on the lead until the Flames scored five straight points to end the set with a 25-20 win.

The second set was all Morningside. The Mustangs jumped out for four early points and did not give up the lead, winning 25-15. Sophomore outside hitter Kayla Giefer and junior outside hitter Krista Zenk were the dominant forces in set two.

Tied at one set apiece the Mustangs trailed early in the third. The Flames scored three straight points to open things up. The teams went back and forth until a late-set rally turned the tide for Morningside. The Mustangs took set three 25-15.

In the fourth set, the College of Saint Mary shifted momentum. The Flames stormed to a 20-10 set lead. Morningside rallied to bring the set to 22-21, but was unable to complete the comeback, falling 25-23.

The Flames were led by Elizabeth Dlouhy and Kamryn Williams with 15 kills apiece. Natalie Patten and Alexis Petry combined for 53 assists. Patten and Payton Robley combined for 48 digs on the evening.