by Tracie Tuttle--Murals in downtown Sioux City are helping bring the alley ways between 4th, 5th, Pierce and Nebraska Street to life.

The Mustangs took it to the No. 1-ranked Park Pirates in the women’s NAIA Volleyball Championships Tuesday night, but came out on the short end of a 3-1 decision. Morningside faced the defending national champion in the first round of pool play, falling 17-25, 15-25, 25-22, 21-25. Next up is #16 Oklahoma City,. That game...

by Abby Koch–Morningside women’s basketball started the Saturday evening Dordt doubleheader against their #5 ranked women’s team. The Mustangs pulled off a victory with a close score of 81-78.

The Mustangs had to come from behind, but a big third quarter led to a 37-27 victory and the GPAC title with an undefeated 10-0 record. Read the game story here. The #1-ranked Mustangs, as well as the #5 Red Raiders, will open the NAIA National Playoff Championship this weekend. Morningside will host #15 Dickinson… 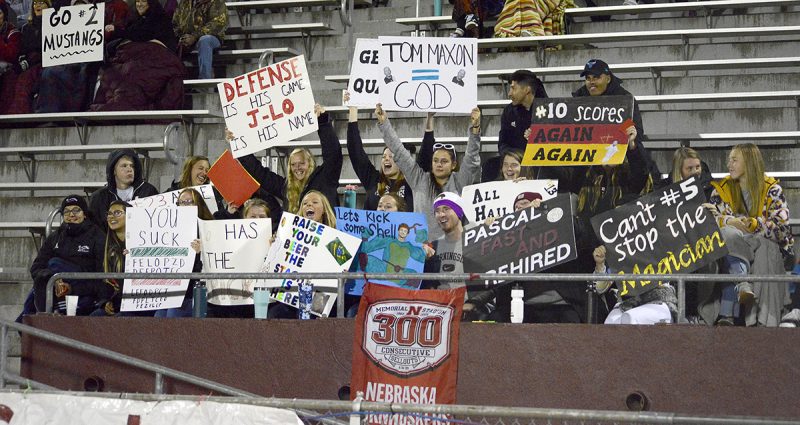 Morningside is out of the GPAC tournament after a 1-0 loss to Briar Cliff Saturday night.

The Mustangs took care of business against Concordia on senior day. The 52-7 home win kept them undefeated on the season, and tuned up for the season’s final conference clash next weekend at #5 Northwestern. The Red Raiders, also 9-0, bested Hastings 44-17 to set up a decisive season-ending game.

by Abby Koch–The Morningside swim team dived into their first at home event, the Morningside Mustang Stampede. The men came in 3rd out of three teams and the women came in 5th out of five teams.