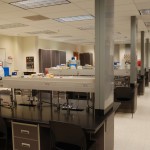 For some students, like Nate Drees, time spent in the laboratories of Morningside College isn’t just for class. 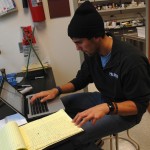 Drees spends between 15-20 hours a week in the lab outside of class time doing independent research. 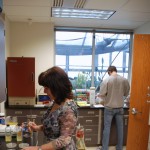 He’s not alone, however, Dr. Rachel Robson, a professor at Morningside College, heads the research. 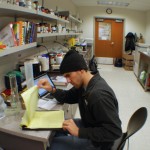 “I like the idea of discovering something unheard of before and new, and then sharing that newly gained knowledge,” says Drees, photographed above reviewing numbers related to his testing. 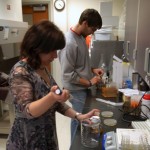 Using viruses that specifically infect bacteria, referred to as bacteriophages, Dr. Robson, Drees and a few other students taking part in the study are testing the bacteriophages against strains of antibiotic resistant staphylococcus aureus, also generally known as Staph Infection. 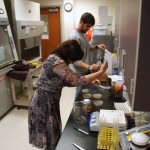 Above Robson and Drees inoculating plates with the bacteriophages. 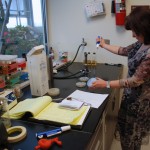 “We will be presenting our findings at Palmer (the annual symposium Morningside College puts on), the Great Plains Emerging Infectious Disease Conference in Iowa City, and the Iowa Academy of Sciences at Simpson College in Indianola this year,” explains Robson, above inoculating more plates with the bacteriophages. 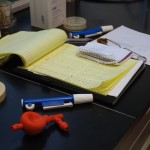 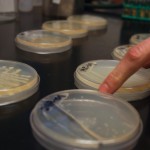 Approximately one-hundred different isolates have been tested during the study. 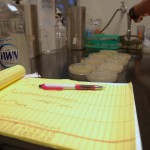 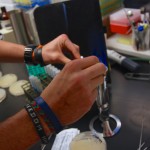 Drees above making sure to keep his environment and test tubes sterile with the open flame of the Bunsen burner. 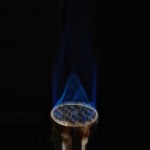 The heat from the Bunsen burner keeps germs from contaminating the open plates and test tubes being used around it. 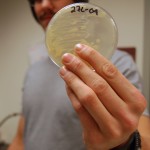 Drees showing the colonies of Staph on Isolate 27L-09. The numbers “27” meaning the 27 person tested, “L” standing for the “left nostril” was tested, and “09” signifying the year the swab was taken. All of the staphylococcus aureus was collected from volunteers nostrils over a few years span. 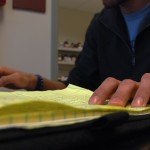 Drees will be graduating this May with a BS in Biology from Morningside College, and pursuing graduate school at Palmer School of Chiropractics in July.

"JazminePaige" is proudly powered by WordPress MU running on Morningside.edu Blogs. It is protected by Akismet
Create a new blog and join in the fun!